Welcome to my 2018 Year-End Review

As an event planner, I’ve always conducted “post mortems” on events to determine what worked, what didn’t and how the next event can be even better. Some of those same concepts can be applied to reviewing life in general – especially when we’re trying to live intentionally and practice being better versions of ourselves. One struggle I’ve had with this practice is that I tend to focus on the negative. For example, I’ll say, “Oh I’m not doing a project like that again because this or that didn’t work.” Or, “I won’t go here or there because I didn’t get much out of it.” This year, I’ve decided to focus on the positive, so I can start 2019 with the mindset of “Wow! Look what I’ve done. Now, what else can I do?” I invite you to come along with me for the ride … 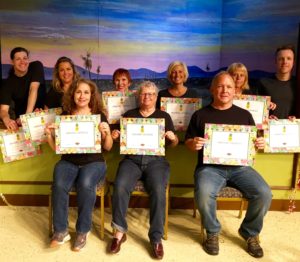 Class #3 poses with their improv diplomas after their graduation show in June.

We* taught 16 six-week series improv classes, and, one of those classes graduated in June making it the improv training center’s third graduating class! (Class #4 is set to graduate in January.) That’s a lot more people in Northeast Florida going through life with a “Yes, and …” attitude! We also led improv playshops at the Palm Beach Improv Festival, at the San Juan Community Theatre on San Juan Island in Washington state, and, at the World Domination Summit in Portland, Oregon.

If you’ve ever read The Adventure Project website, you know you won’t see any kids adventures because we’re always trying to get grown-ups to play more at home and at work. And, if you check out The Adventure Project’s social media, you’ll find kids all over the place because they always find The Adventure Project! This year, we hosted two improv kids camps, an after school improv program and playshops for Big Brothers Big Sisters of St. Johns County, the Northeast Florida Odyssey of the Mind chapter and St. Augustine Youth Services – as well as the San Juan del Sur Day School in Nicaragua! 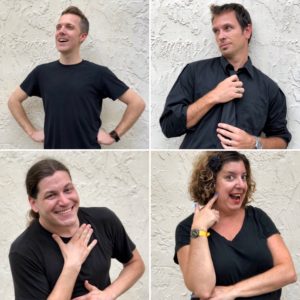 Tiny Town – an improv troupe that reveals secrets about St. Augustine based on audience suggestions – debuted earlier this month.

If there’s one place where it can be hard to play, it’s at work. We feel the adventure should NOT stop at the office as the power of play has the ability to transform work cultures. So, we spent time playing with the staff and volunteers from the St. Augustine Lighthouse and Maritime Museum, Tag! Children’s Museum of St. Augustine and Casa Oro Group in San Juan del Sur, Nicaragua (to name a few) in order to make for a more cohesive team that supports the concept of “we before me.” We hope to be doing a lot more team development with organizations in 2019 as this really can have a snowball effect — people do business with people, so better relationships make for stronger teams.

Our community celebrated two years of improv in St. Augustine with a sold out Improvapalooza. 3 Blind Dates, the unscripted romantic comedy that’s still going strong, sold out on Valentine’s weekend. And, we launched the monthly (Unscripted) Comedy from the Corazon, which – you guessed it – sells out regularly. Our short form improv troupe, genNOW, continues to grow and thrive. And, our brand new long form troupe, Tiny Town, launched this month – to rave reviews.

* If I counted correctly, 20 of 25 flights I took this year were paid for via points and miles!

* I returned to some of my favorite places such as Manzanita, Oregon; the San Juan Islands in Washington, Costa Rica, San Diego, Chicago, New York, and Portland – the one on the west coast.

* I took road trips all over Florida, into Georgia and up to the Outer Banks of North Carolina. 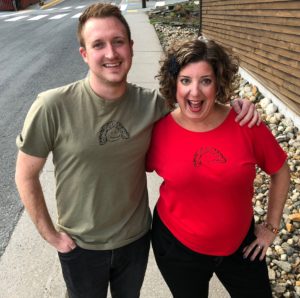 Reunited with the original It’s All About Amy partner – the one and only, Mr. Jared McBain – in Juneau for the Alaska State Improv Festival

* It’s All About Amy played at the Alaska State Improv Festival, Countdown Improv Festival and the Palm Beach Improv Festival. And, the show also appeared at Finest City Improv in San Diego and Florida Studio Theatre in Sarasota.

* I spent time with Bon Jovi in Philadelphia and U2 in Nashville (along with a few thousand other friends).

* I made new friends and revisited old ones during my travels and my improv experiences. Also, my local friends are starting to really grow roots now that I’ve been in St. Augustine for three years.

* And, I acquired a little sister through Big Brothers Big Sisters of St. Johns County. I also acquired a niece the old fashioned way!

(*Notice how I say, “we” a lot even though The Adventure Project is just me, Amy. Well even though I’m a solopreneur, it takes lots of people and organizations to collaborate in order to do all the things “we” do, so it only seems right to use the proper pronoun!)